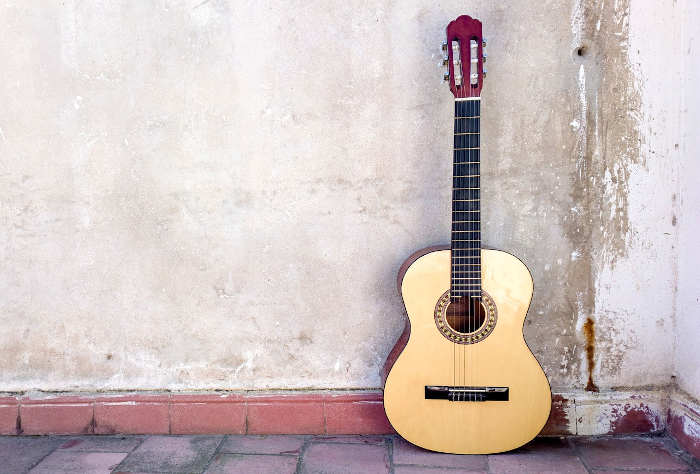 Like with any new hobby, learning to play guitar comes with a slew of new terms and qualifiers that you’re probably puzzling over.

The difference between a classical and an acoustic guitar is just one of many things you want to know about as you start your musical journey.

It’s pretty straightforward, and I’m happy to detail for you exactly what sets these two types of guitars apart.

Classicals are, by definition, acoustic guitars, but the term acoustic is frequently used to refer only to those that are strung with steel strings.

This is probably due to the prominence of steel string guitars over classical guitars in popular music, and most people will assume you’re talking about a steel string guitar if you mention an acoustic, but it’s important to know that classicals are themselves acoustic instruments.

Steel string acoustics, especially the large-bodied dreadnoughts, can be played quite loudly without losing any sonic clarity. Take one to a busy intersection and jam out on the sidewalk and you’ll see you can be heard fairly well over the sound of traffic.

Classical guitars, on the other hand, are much quieter. With acoustics, body size determines volume, and classicals have a lot less space for the sound to be internally amplified.

Nylon strings, as you might imagine, don’t have a lot of oomph either.

This makes classicals soft, warm, and mellow sounding compared to the big, brassy, bold tone of their steel string cousins.

So, with that out of the way, let’s talk about their physical differences: namely, how they differ in build and construction.

Looking at the two from a distance, the first and most obvious difference you’ll notice is that steel string guitars usually have larger bodies than classical guitars.

Although steel string acoustics come in a range of sizes [explained in depth here] including mini instruments for children and medium-sized parlor guitars, they are most commonly found with dreadnought bodies, smaller only than the “jumbo” style body of some uncommon larger acoustics.

Classical guitars also come in a variety of sizes, ranging from the smallest Piccolo style body to the largest Contra bass styles.

Most commonly, you’ll find the Prime, or Concert style body in classical guitars.

These are further categorized from largest to smallest, notated 4/4 (full-size), 3/4, 1/2, and 1/4. Generally the most common classical guitar body will roughly compare with the parlor size in steel string acoustics.

The next obvious difference between classical and acoustic guitars is that the fretboard of classical guitars is anywhere from six to twelve millimeters wider than the width found on steel string instruments.

This serves two purposes: it adds strength and stability to the guitar’s neck, and the greater string spacing accommodates fingerstyle playing used on classicals.

Sizing aside, there are a few more construction differences worth noting.

Without this sturdy internal bracing system, classical guitars are generally significantly lighter than acoustics of around the same size.

How do these differences in build affect the playability of the guitars?

First, it’s obvious that the wide fretboard is going to change how the instruments play.

What about the steel versus nylon strings?

Nylon strings are much easier on the finger tips and don’t cause as much pain to beginner guitarists as do steel strings. But this softness of material also means you can’t really play with a pick.

Classical guitars are intended to be plucked with the fingertip or fingernails; using a pick will cause string breakage in short time.

Need to practice your fingerstyle technique?

Here are 111 songs for classical guitar perfect for beginners.

They’re also held differently and require different playing postures, at least if you’re going to be formal about it.

The smaller body size and shallow waists of classical guitars don’t rest on the thigh; instead, you’re supposed to hold it between your legs with the neck pointing more skyward than how steel string acoustics are played.

A Note About Nylon String Guitars

Not all guitars with nylon strings are classical guitars! They have a similar relative in the guitar family called a flamenco guitar. The main differences between classical and flamenco guitars are:

Flamenco guitars are more of a rarity in music shops than classical guitars, but if you find one, compare the two and you’ll see how different they can be!

That should clear things up a bit regarding the differences between classical guitars and acoustics.

Either one could work well for you depending on the type of music you’re wanting to play. Just remember: steel string acoustics are big, loud, and can be played with a pick.