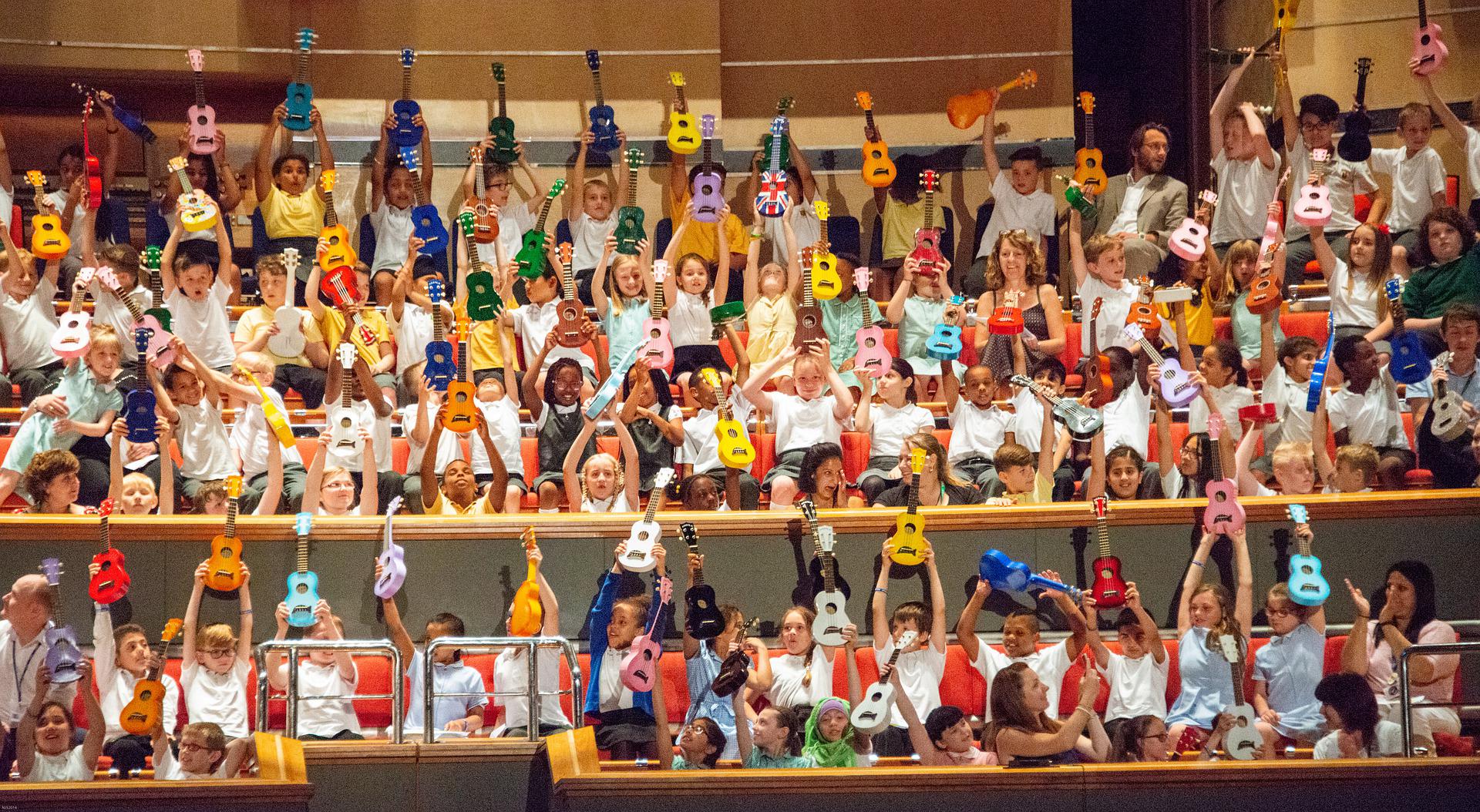 So you’ve picked up a ukulele and you want to start learning some songs for beginners?

Perfect. The ukulele is a charming little instrument, but that does not necessarily mean that it is a “beginner” instrument. As with all instruments, they are easier to learn than to master. It’s the same case with the ukulele. Because of its small size, people usually associate it with a toy, rather than a serious instrument. But as soon as they pick it up, they may find that it isn’t as easy to start as it had seemed. So, where do you start?

Let’s presume that you’ve already familiarized yourself with the ukulele. You’ve got a hang of the major and minor chords, you’ve developed a feel for different strumming patterns, and your speed and precision when changing between chords have improved. That’s great! It’s time to learn a few songs. After all, that’s probably the reason you decided to learn the instrument in the first place. So, let’s get right into the list.

Let’s start the list with a happy song. And quite possibly the most iconic song for Ukulele that there is. It’s a song that is bound to send you daydreaming about the idyllic place that IZ is singing about.

The story behind the song is quite remarkable. Apparently, in 1988 a friend of Kamakawiwo’ole called a Honolulu recording studio at 3 AM and asked them if they could come in to record a track. The owner of the studio, Milan Bertosa, just told them: “You can if you can make it in 15 minutes.” Well, they did. And it took Kamakawiwo’ole just one try to record the whole thing, after which he left. And thanks to that event, we now have with us one of the most iconic and beautiful tracks that have ever been recorded with the ukulele.

And from a happy track to a sad one. After all, you can’t be happy forever. And it’s nice to be able to process those emotions through a song. People might be tricked into thinking that it’s a cheerful song because its root chord is a G, which is usually considered one of the “happiest” chords there is. Far from that actually.

Let’s be real, we’ve all been at that place. You’re just done with everything going around you. So, why not be tastefully cynical and play this song to cheer yourself up. The song is a bit faster-tempo, and with a larger chord progression, so it’s advised to maybe not start with this song. But it’s definitely an interesting song to have in one’s repertoire. Guaranteed to make you the life of the party if you ever play this song at a party.

Mother is a pretty interesting song. Personally, I consider it one of the more interesting songs off “The Wall” album, just because of its thematic. None of us has a say as to when and where we are born. It’s also a fact that we inherit the beliefs and ideals of our elders – along with their fears.

This song is exactly about that. About the crippling fears, anxieties, and hate that we inherit from our guardians. Yet, because they are also our protectors, they also offer us the greatest comforts. So it’s a very ugly situation. On one hand, you know that they are wrong in their beliefs and actions. But on the other hand, you cannot do anything to stop it.

We all know this song – we just forget it from time to time. Chumbawamba is possibly the most difficult band to categorize on this list. Are they punk? Are they rock? Are they satire? They’re a mix of all of that really.

Whatever they are, Tub Thumping is an iconic tune that you should definitely consider learning on the ukulele.  All it takes is 5 chords, but don’t worry, the majority of the song is just changing between D, G, and A.

Mitski’s been very popular lately and for good reasons. Her compositions bring a breath of fresh air to the pop genre, bringing in elements of jazz and electronic music. Heat Lightning is an excellent track to start with if you’re considering learning any Mitski songs.

It should challenge your knowledge of chords, as it incorporates both minor and major chords. Just remember to have fun. The song is about insomnia and losing sleep, but you don’t have to lose sleep if you don’t get it right.

This song is what happens when you mix musical talent and chaotic-dumbass energy. Originally, it was a product of a Minecraft stream, a challenge to the musician to make a song from the topics that he is given… So, he came up with this. And I won’t lie, it’s kinda catchy.

The song’s verses are mostly a progression between C and G, with the pre-chorus and post-chorus changing it up by adding F, Am, Em, and back to a G.

The Beatles – Here Comes The Sun

We’ve talked about the Beatles before, and one of the songs we mentioned in that article is this one. “Here Comes The Sun” is an iconic hit that should be considered a “must-learn.” And it’s really easy to do so as well.

You can play the song by just using A, D, E7, and B7. Now, if you want to play the whole tune, you will also have to incorporate a few more chords.

Now, some of you might have first encountered Joji as Filthy Frank. And Filthy Frank had a friend called Pink Guy who was a surprisingly good ukulele player. Now, Pink Guy also has a music career, but let’s leave that for another day.

Worldstar Money is a mellow tune that can be played with just 4 chords. These chords are Am7, Cmaj7, G, and Gmaj7. The song is like floating in a dream. The only question is, do you wake up?

Thin Lizzy – Dancing in the Moonlight

A classic. A song that reminds us of better times, of that one summer night that we can never forget. So why not remind yourself of those sweet memories with this song.

It’s quite easy to play it, all you need is 4 chords. Em, D, C, and G. Now, if you wanna play the solo as well, go wild! Even if it’s just on a single string, the feeling of nailing your first solo is amazing.

Let’s be honest, we all love Tay-Tay. And if someone doesn’t, this song might just convince them. The song was made for the movie “Where the Crawdads Sing”, the composition includes influences from country and bluegrass. And what’s most interesting to me at least is that it was performed with instruments from the 1950s, and you can really feel it in the track.

Now, of course, I won’t make you dig up a ukulele from the 50s. But if you want to play this song, the chords are a progression of Bm, A, Em, and D.

If you’ve been browsing TikTok, you might have come upon this song once or twice. And it’s a pleasant lil’ song, catchy. You might have been asking yourself what the chords are even?

Well, look no more. The chords are a simple progression between B, E, and A. TikTok is a great place to discover new music, let it be your muse and inspire you.

Melanie Martinez is another name on this list that has been recently gaining in popularity quite rapidly. You might have heard this song somewhere, be it on TikTok,  or it may have been recommended to you by YouTube. Whatever the reasons, it’s a pretty cool and easy song to learn, especially if you’re a beginner.

The root chord is an F, it then goes to a Dm, C, and back to F. And during the chorus and pre-chorus you will also need Bm and Gm.

Frank Sinatra – Fly Me To The Moon

Now, this song might be intimidating at first, as it uses a whopping 12 chords. But don’t be intimidated, I’ll tell you why. You can very easily play this song with just downstrokes, and it will sound perfectly fine. Having so many chords makes it perfect for practicing chord transitions.

Those are just a few easy songs that you can learn on the ukulele. And remember, constant practicing and experimentation is how you learn your instrument. As such, don’t forget to practice as well as learn new songs. Technique is way more important than a wide repertoar.

But hey, since you’re here, you might also be interested in this article that we wrote about easy blues guitar songs.