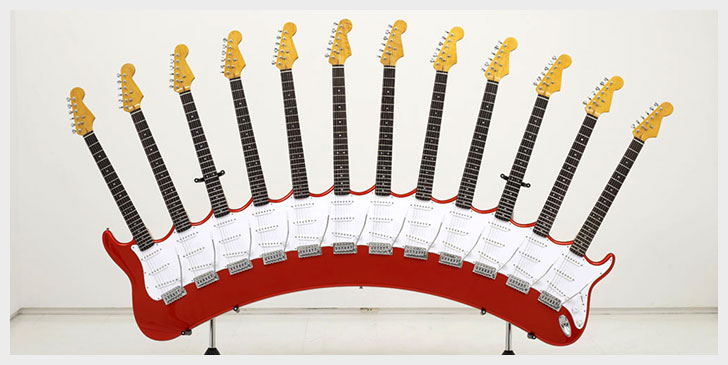 Over the years, there have been many strange and unusual guitars that have been created, and some are downright weird. So today, we’re gonna take a look at some of those guitars. Ranging from funny designs, and unusual/creepy designs, to straight straight-up art projects that aren’t meant to be played in any serious context.

So without further ado, let’s get right into it, shall we? First, we’ll start off with…

The Destroyer is quite a cool concept actually. It takes the approach of combining multiple instruments into one. Mark Dalzell created this guitar for the 2007 Jersey City Studio Artist Tour. It comes with a standard guitar neck, a mandolin, and strangely enough – a theremin. Yup, that’s right. The madman actually added a theremin to the guitar body. Why it is called “The Destroyer” is anybody’s guess really. My theory is that once you manage to play it, your mind will be destroyed by the experience. Plus, it gets bonus points for having its own LED lights that give you the ability to play it in the dark. 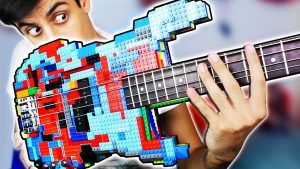 Everybody likes LEGO right? You can make some pretty cool designs with it. From castles to nice little houses, to a star destroyer or what have you. Well, Davie 504 decided that he’d use LEGO to make a bass guitar. The most surprising thing to me is, well… It doesn’t sound half bad actually. Matter of fact, it sounds pretty good. Give it a listen for yourself here. According to Davie 504, it took him three days to make the guitar and to get it to actually work. The end result is a pretty unique and cool design that I’m sure is any kid’s dream to have. 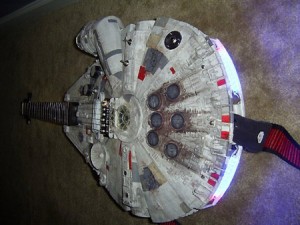 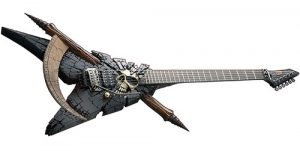 I was debating if I should put this guitar here, or in another category. This is the ESP Shinigami. Shinigami means “Personification of Death” in Japanese by the way. And it’s one of the cooler ESP designs out there. ESP is no stranger to creating some of the coolest custom designs out there. Just browsing through their Custom Shop Gallery is an eye-watering experience. Though this one takes the cake for sure. I’d say it’s the perfect guitar for death metal… if you wanna be edgy that is. 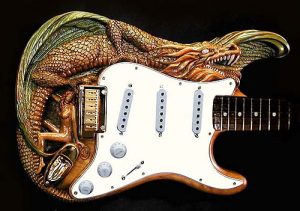 While researching for this topic I came upon Doug Rowell and his carved guitars. The specific guitar in the image above is the “Dragoncaster”, and the details are immaculate. According to his site, he’s been making these kinds of guitars for well over 50 years at this point. Each and every guitar of his is a work of art, though some more conventional than others. If you had one of these guitars, you’d be in a dilemma if you should play the damn thing or preserve it in a display case.

Of course, not every custom guitar is pleasing to the eye. As a matter of fact, most custom guitars are the exact opposite. 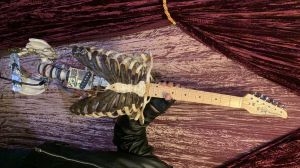 Yes, you read that right. The uncle guitar. As in, someone actually made a guitar out of their dead uncle. This remarkable fear of craftsmanship comes from a man known as Prince Midnight. Allegedly, in life, his uncle had been a huge metalhead. So when he died, to honor him, he decided to preserve his skeletal remain and make a functioning guitar out of them. Now he mostly uses it to play black metal on his YouTube channel. According to Prince Midnight, one of the issues with the guitar is trying to keep it in tune, as it constantly gets out of tune. All things considered, the “Filip Skelecaster” as he calls it is a pretty cool design. 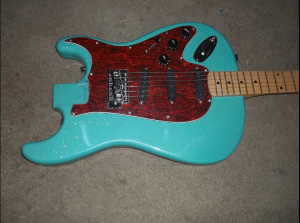 The Backwards Strat is quite a simple complex really… It’s just mindboggling as to why it exists in the first place? It’s kind of like looking at an oxymoron in instrument form. It’s playable, as demonstrated in this YouTube video. Why you’d want to play it in the first place is another question entirely, as it isn’t very comfortable to play. A peculiar design from a demented mind who only wants to watch the world burn. 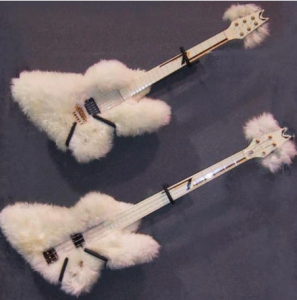 The Dean Powder Puff Zee is probably as unconventional as unconventional gets when it comes to guitar designs. I had initially intended to put the ZZ Zulu Warlord on here, another “hairy guitar” design, but that one actually looks somewhat appealing. This guitar on the other hand is entirely appalling. I can’t even begin to imagine what it would feel like to play a fuzzy guitar. I’d start sweating just by holding it in my hands. This guitar is probably made out of a Yeti or something similar. 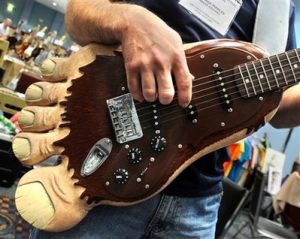 The aptly named “Bigfoot Guitar” deserves a spot on this list for sure. If the last guitar was made from a Yeti, then this one is made from its relative, the equally supernatural Bigfoot. The origins of the Bigfoot guitar come from guitar maker George Marlin, who designed the guitar for Miami Beach Guitar Festival. It apparently works perfectly fine all things considered. I’d love to see someone accompany the Saxsquatch with this guitar. That is something we are sorely missing, a sasquatch-themed band. 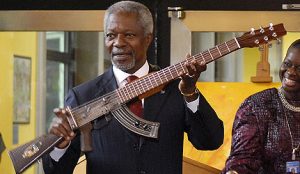 Bob Marley is famous for singing “One good thing about music when it hits you, you feel no pain.” Well, not every instrument is made the same. And if this instrument hits you, you will definitely feel some pain. The image above is of former UN Secretary-General Kofi Annan holding a Kalashnikov rifle that had been converted into a guitar. Now I’ve seen quite a lot of rifle conversions, but this one is probably my favorite.

Of course, some guitars are intended as art projects through and through. They might be playable, but nobody in their right mind would actually go through the hassle to play any of these guitars in a serious context. 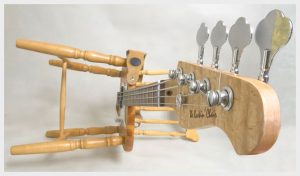 These guitars really put the “rock” in rocking chair. They had originally been conceptualized in 1984 in Sweden by a couple of guys working at a newspaper. They had been discussing the idea during their coffee break. Well, a couple of years later, one of the guys actually found the will to go out and actually turn the concept into reality. There are videos on YouTube of the guitars being played if you ever got curious as to how it actually sounds. And, it sounds about as well as you can expect from such a design.

This “guitar” is about as art as you can get. It’s barely a guitar. In actuality, that’s the whole concept, that there isn’t a guitar so to speak. It’s a weird design for sure, I’m not even sure if it is even playable. It’s just a construct of a neck with a bunch of pipes running through it According to the creator Eric Mecum it is playable, but there is no video or audio proof on the internet to back it up. At the end of the day, it’s probably better if we find it in a museum – rather than a guitar shop. 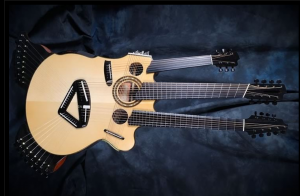 The Manzer Medusa is what you get if multiple instruments had an orgy and spawned a child from it. In total, it has 52 strings across multiple necks, of which one is fretless, one is a baritone, one is a harp, and one neck is even scalloped. The origins of this guitar are when a Danis comic artist by the name of Henrik Anderson ordered a custom guitar from Canadian luthier Linda Manzer. He jokingly sent over a sketch of a cartoon character playing a similar crazy guitar. So Linda, up for the challenge, actually made a nearly identical copy of the sketch guitar. What’s amazing to me is how well everything goes together, and although uncomfortable to hold, it’s actually quite playable. 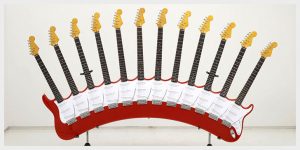 This guitar is for the people who think that one guitar is never enough. Well, 12 is a bit too much when you stop and think about it. This project is by Japanese designer Yoshihiko Satoh. He makes these kinds of guitars mainly for artistic reasons, yet he still has the courtesy of making them playable. As demonstrated by the designer himself. Good luck tunning the whole thing though. 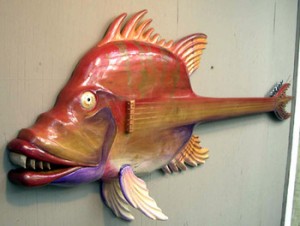 Look at this thing. It’s just so stupid. That’s what makes it so wonderful. It’s painful to the eyes, probably unplayable, and shouldn’t be seen anywhere else other than an art exhibition. A perfect example of an “art guitar.”

If you think this is funny, you should consider checking out the jokes about guitar we wrote recently.