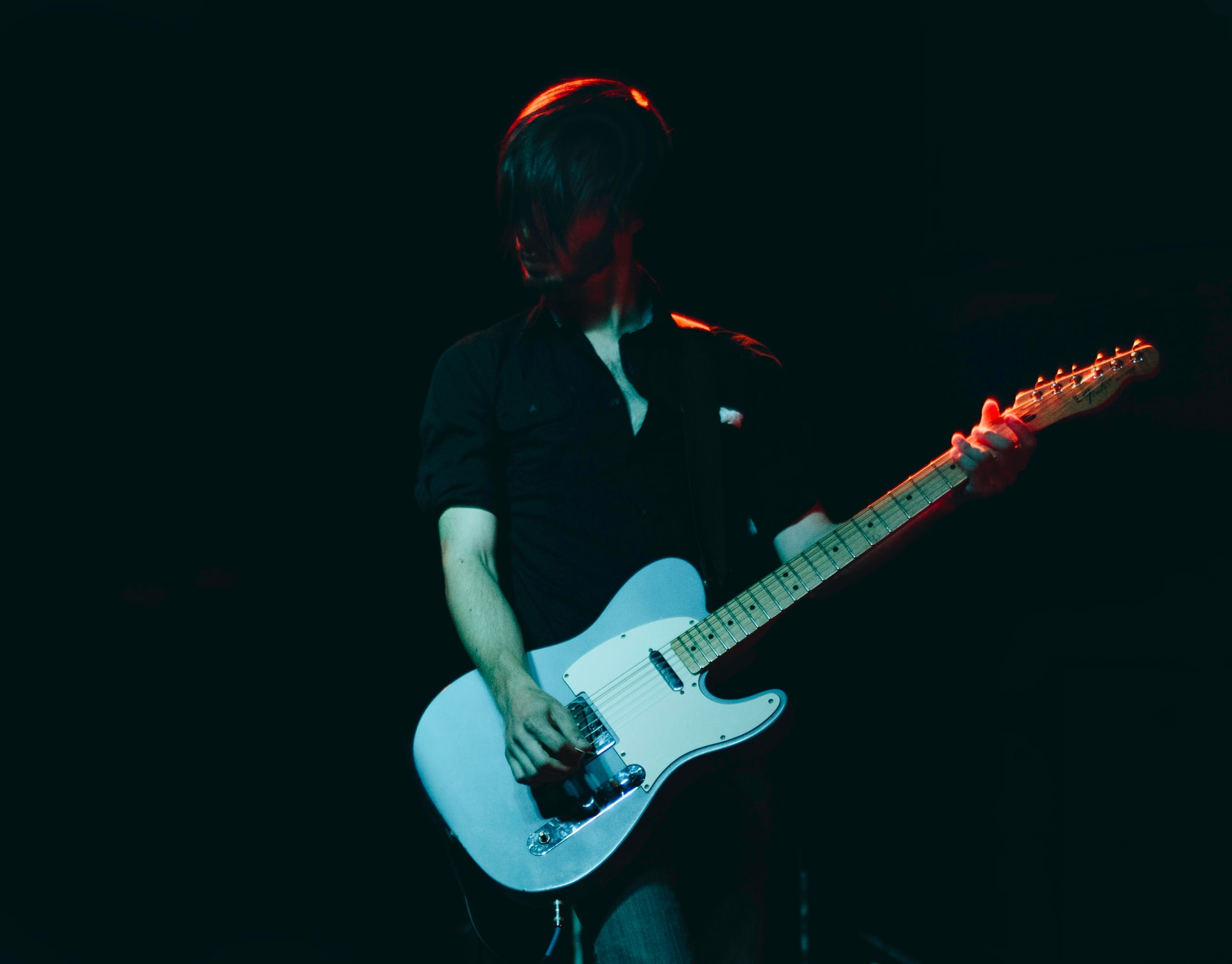 Today, we’re going to take a look at how to play blues guitar chords. You’ll learn the basic 12-bar blues progression, a couple variations, and how to play the blues in any key.

By the time we’re done here, you’ll be able to go to any blues jam and follow along with the pros.

Learn to Play Blues Guitar Chords in Any Key

Playing 12-bar blues chords takes just a few special tricks, and I’ll lay them all out for you the same way I’ve taught them to many others in the past.

What Is the Twelve-bar Blues?

The foundation of the blues genre is a simple chord progression called 12-bar blues.

There are different versions of the 12-bar blues progression – also called blues changes – but the simplest form uses 3 chords: the I, IV, and V.

The most basic 12-bar blues is just 3 blues chords played in a 12-measure (bar) pattern.

This progression, played on a loop, forms the foundation of the entire blues genre.

The secret to playing 12-bar blues in any key is learning how to find these I, IV, and V chords.

Music notation often uses Roman numerals to show chords. In a scale, each note corresponds to a number (the degree of the scale), with the root note (or tonic) of the scale being number 1 (I).

All we did is “count” the musical alphabet starting from C. The uppercase (I, IV, V) chords in this diagram are major chords, while the lowercase (ii, iii, etc.) are minor chords – but you don’t need to worry about that for now, because all we’ll be using are major chords.

You can see now that in the key of C:

So if we want to play the 12-bar blues progression in the key of C, we will play:

Remember that each measure is 4 beats, and you’ll wind up with something that looks like this:

That’s the basis of the blues, but how exactly do you play this on guitar?

How to Play Blues Guitar Chords

In the 12-bar progression above, you have a lot of options for chord voicings.

If you’re a beginner guitarist, you’ll probably want to start off playing open chords, the simple shapes like: 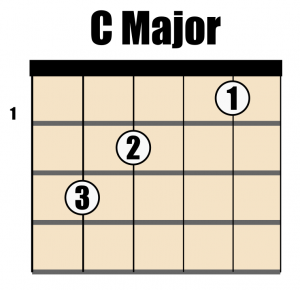 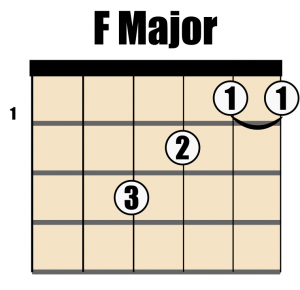 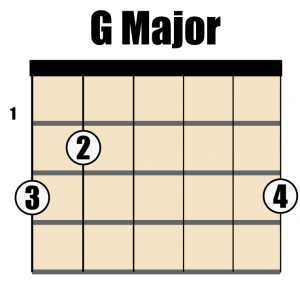 Many times in 12-bar blues, you’ll hear 7th chords played in the IV and V slot, and oftentimes also in the 4th bar of the I chord, like this:

In 1st position, these 7th chords are played this way:

Another popular variation of the 12-bar progression uses a V7 turnaround in the final bar. Notice another change in this progression is that the 10th bar swings back around to the IV chord:

How to Play Blues Rhythms

The strumming pattern you use will change depending on the type of blues you’re playing.

Blues rhythm is a whole other topic, so I recommend you look up video lessons for your preferred blues subgenre. For example, here’s how to play Texas blues rhythm guitar:

Once you’re comfortable with the feel of the 12-bar progression, you can move on to playing the blues shuffle. This is one of the most popular blues rhythms and is an essential tool in playing blues guitar.

The blues shuffle rhythm is probably the progression when you think of when you first think of the blues. It’s a simple strum pattern consisting of swing triplets in a 4/4 time signature.

Instead of playing open chords like we talked about above, you’ll be using 5th chords when you play the blues shuffle.

For a detailed breakdown of this technique check out this article from Happy Bluesman.

So now you know the basics of playing blues chords. At this point, you can start to write your own blues songs using simple chords.

But what if someone asks you to play blues in the key of F#? What do you do then?

There are just a few things you need to know to play the 12-bar progression in any key.

Learn the Notes of the Neck

Now, if this is your first time ever looking at a guitar, or if you just need a refresher on your guitar neck knowledge, let me direct you to our complete starters guide for guitar.

That article will teach you all the essential basics of guitar music theory—most importantly, how to learn the notes on the guitar.

We’re going to learn how to use a simple box pattern to find our blues chords. It’s played only on the E and A string, so learning the notes of these two strings is enough.

Once you know where the notes are on your neck, you can take the next step to playing blues guitar in any key.

This is a simple box pattern that you can use to find the chords you need for a 12-bar progression. 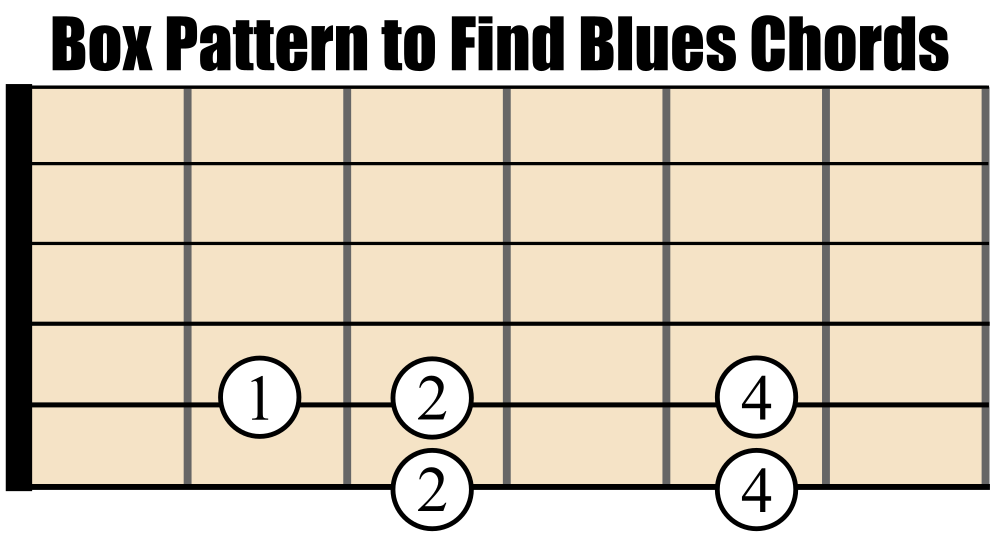 On the next string, use your 1st finger (pointer) to play the third note. And then repeat using your 2nd and 4th fingers to play the final notes. 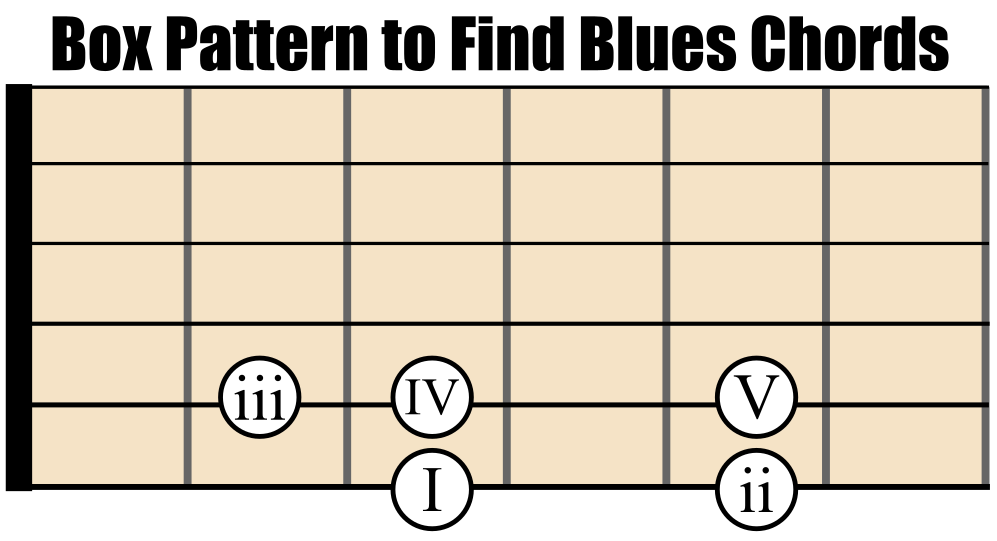 Your I, IV, and V chords are right there as the 1st, 4th, and 5th notes of this box pattern.

You can see here if we overlay this pattern anywhere on the neck (except for starting on the G string), we can easily find the I, IV, and V blues chords of any key.

To put it another way, to find the blues chords in any key:

Step 1: Find the root note (tonic) of the key on the E string. The major chord of this note is the I chord of the 12-bar progression.

Step 2: On the same fret as the root note on the A string is your progression’s IV chord.

Step 3: The V chord is 2 frets up from the IV chord – the major form of the note that is 1 string and 2 frets above tonic.

That’s all there is to it!

Now if you meet a harmonica player who only has a harp in the key of C#, you’ll know exactly the steps to take to play the 12-bar blues with them!

Eventually you’ll memorize where all the notes are, but remember you can just count the musical alphabet up the frets one half-step at a time.

Step 2: Beginning on C#, play the Box Pattern to find the I-IV-V chords

As long as you remember that simple 5-note pattern, you can quickly find the blues chords in any key.

Step 3: Play the I-IV-V chords in the 12-bar blues progression

All that’s left to do is to rock out!

Use this basic 12-bar blues progression and its variations, and you can improvise a blues song in any key with ease!

Don’t forget to throw in some 7th chords to spice things up. Now you’re ready to play blues guitar chords at every jam.

Once you’ve got the basic 12-bar pattern blues chords down, you’re well on your way to mastering the blues.

The next steps to take are learning popular blues songs and learning how to play blues solos.

Be on the lookout for our upcoming lesson on how to play blues scales, and you’ll be equipped with all you need to start writing and freestyling your own blues tunes.

12-bar blues –  a standard blues chord progression using the I, IV, and V chords of a key played in a 12-measure pattern

5th chords – also called a power chord. A simple 2-note chord made of the tonic and the 5th of a key, for example, C-G is a 5th chord.

blues changes – another name for the 12-bar blues progression

chord voicing – the way that notes are arranged in a chord

major chord – a chord consisting of the 1st, 3rd, and 5th degrees of a scale

minor chord – a chord consisting of the 1st, the flatted 3rd, and the 5th degrees of a scale

root note – the first note in a scale, or the dominant note of a chord that determines the key of the chord

scale – any defined series of notes played in order

tonic – the first note a scale