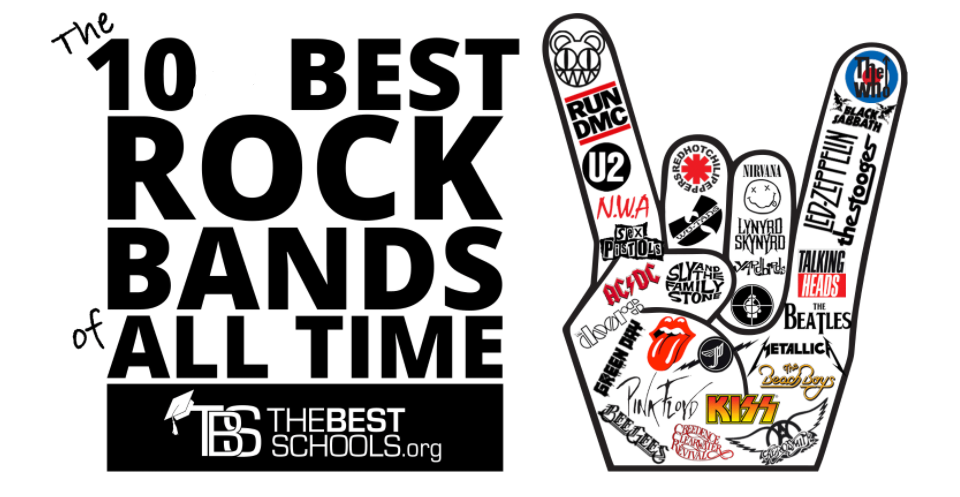 We have a lot to thank rock music for. It’s one of the most beloved styles of music that has ignited the spark for a staggering amount of world-class bands and albums to be birthed. It’s a genre that has rippled through the generations and can still be heavily felt (and heard) even today.

There’s a myriad of styles associated with rock which have all played their part in the progression of modern music, as well as having a significant cultural impact and legacy.

From classic, blues, and gospel drenched style of Rock ‘n’ Roll with artists such as Elvis and Chuck Berry, to the conceptual albums of progressive legends like Pink Floyd or King Crimson.

Even the elaborate, hairspray and glitter covered spectacle that is glam rock. Covering every rock band would be a truly monumental undertaking. So today we are praising our top, greatest rock artists of all time.

Please join us on this exploration of the cultural phenomenon that changed the landscape of music, from the classic oldies all the way to the drug and alcohol-laden exploits of the rock superstars.

Top 10 Rock Bands Of All Time

AC/DC are one of those rock bands that have never fallen out of fashion. Beloved still by both rock-dads and teenagers alike. With their timeless and anthemic music is still commonly being used on television and movies today.

The Australian band is known for the crushing, heavy rock riffs of Malcomb Young. The revolutionary pentatonic/bluesy rock shred of brother Angus Young, and searing and gritty vocal performances from singer Brian Johnston. And while certainly sitting on the heavier side of the rock spectrum, AC/DC are without a doubt the quintessential rock powerhouse.

Formed all the way back in 1973 and are still active today, the band has accrued a tremendous catalog of best selling albums including the legendary ‘Highway to Hell’ and the iconic ‘Back in Black’.

They are also known for their visceral live performances, which are both extremely loud and energetic. With guitarist Angus performing his signature rock ‘n’ roll moves such as ‘The Duck Walk’ which involved shuffling across the stage. Or ‘The Dying Bug’, which required the performer to drop to the floor and gyrate wildly like a dying bug.

One of the things that make the Rolling Stones unique is that much of their notoriety came not from their music, which was of course a force in and of itself. But rather the fast and loose lifestyle of the band lived which garnered them just as much of a reputation as the music itself. Well known for their keen use of drugs and living the true rockstar lifestyle.

The band’s antics are largely what pioneered the widely used term ‘sex, drugs and rock ‘n’ roll’. But that is not all the band had to offer. Having built a decent following in the early ’60s, they would go on to release some of the best selling albums of all time.

Including the monumental Sticky Fingers album released in 1971, which sold an eye-watering 22million copies. Also boasting multiple Grammy, MTV, and NME awards. They had the musicianship to back up the showmanship. Still active today, there is no doubt that The Rolling Stones will forever be known as one of the greatest rock bands of all time.

Leaning much more towards the heavier side when compared to artists such as the Beatles. Guns ‘n’ Roses are the rock band that even people who don’t listen to rock will have heard about. Originally formed in 1985, they found themselves rising to prominence extremely quickly.

With only 6 studio albums to their name, they have truly stood the test of time with many modern bands such as Nickelback and Avenged Sevenfold citing them as crucial influences.

Lead singer Axl Rose wields a very unique and powerful vocal style, combining the aggressive and raspy fry needed for the most high energy of rock songs. Yet he also had the versatility to perform the group’s most mellow of ballads. Meanwhile, lead guitarist Slash, with his iconic top hat and Gibson Les Paul guitar would become a force in his own right.

All this fame and success was well earned by the band as each musician was a master at their respective instruments. Singer Freddy Mercury boasted one of the most powerful voices around that would routinely leave people in awe as his live performances matched (and even exceeded) that of professional studio recordings.

Freddy was a true one of a kind talent and was also an extremely creative songwriter, having composed many number 1 hits including Bohemian Rhapsody and classics such as We Will Rock You. After Freddy’s passing in 1991, the band had released 14 studio albums and toured the world a great number of times. Now we are left with the memory and love for one of the best bands ever to have existed.

Continuing with the British legends, a list of the greatest rock bands wouldn’t be complete without mentioning Led Zeppelin. While on the higher energy side of the style, there was still plenty of blues, classic rock, and even a smattering of folk present in their music.

A large part of why Zeppelin was so revered is that they pushed the style of rock onward as it grew a little too safe for many listeners throughout the ’70s. So adding this new edge and unique spin to the style was refreshing to fans who quickly elevated them to rock icon status.

As much as their music has achieved commercial success, they are also well known for their impact on the industry. Being one of the main bands to move away from single based releases and instead pushing the full length album.

Which is something that would subsequently become widely adopted across all genres for decades to come.

The man with a golden touch. Every project Eric Clapton played on, whether it be the Yardbirds, John Mayall’s Blues Breakers, Cream or his equally successful solo work would always achieve massive commercial success.

Eric is very much the quintessential rounded rock musician, all encompassing within the genre. Boasting the emotive blues phrasing, world class vocal performance, and solid songwriting ability to make him one of the most well rounded musicians in the business. Primarily known for popularising the blues/rock style of guitar playing, Eric has earned over 18 grammy awards and sold hundreds of millions of albums.

Making him one of the best selling musicians of all time. While not known much for having high levels of technicality in his playing, his unique style and voice is one that has influenced many generations of musicians and guitarists alike.

This was due to his tasteful songwriting and large emphasis on song structure over traditional ‘showy’ hits. He is an important figure in the rock music space and will usually be one of the first names that will crop up when discussing the best musicians of all time.

Yet another British band that made a significant impact on the rock scene. But unlike some of the more accessible bands within the style, what made Pink Floyd unique was their smattering of influence from more ‘off the wall’ genres such as psychedelic rock, and also progressive rock.

The subject matter and tone of the music would often go against the grain of traditional rock.

With thought provoking lyrical themes that flirted with more somber and darker topics. Touching on social commentary masked behind symbolism, or emotional tones that at first glance didn’t seem a good fit for a number one selling band.

But become a number one selling band they did! with over 250 million albums sold worldwide, chart topping albums, and grammy awards. The prestige of Pink Floyd is one that few other bands could hope to match and serve as solid proof that long-form compositions and conceptual albums can indeed resonate with larger audiences.

Even if you are not an avid follower of KISS, there’s a good chance you’ve seen something of their live performances.

Musically the band sits in the pop or glam rock space. Many credit the visual aesthetic and stage performances of the band as precursors to the invention of heavy metal music, which has always been grounded in rock. These American rock legends boast an induction into the prestigious hall of fame, over 75 million albums sold worldwide. Plus many famous rock and heavy metal bands of the current era crediting KISS as their primary influences.

Sometimes it can be hard to comprehend just how popular The Beatles were. Even today in 2021 they remain the best selling band of all time with over 600 million sales to their name. Formed in Liverpool, England in 1960. John Lennon, Paul McCartney, George Harrison, and Ringo Starr would go on to shake the world with never before seen levels of success.

In stark contrast to a band like KISS, The Beatles had a more prim and proper dress style. Musically focussed on catchy tunes using interesting vocal harmonies and provoking chord changes. With a smattering of classical influence keeping musical intrigue, while the pop influence created an accessible package.

The Beatles really did change the face of music and played a large role in shaping the culture of the youth during the ’60s. Including the popularisation of psychedelic drug use during that time, rock on!

Having spoken a lot about the British rock bands, it’s time to give credit to one of the greatest American rock bands of all time. Formed in the 1970s. Aerosmith took the already laid out foundation of rock music and executed it with absolute excellence.

Being able to perform a high energy rock ‘n’ roll song one second, and immediately swap to a power ballad the next. The band’s success came from great songwriting abilities and incredible vocal performances from singer Steven Tyler.

They certainly went through some ups and downs, suffering through periods of drug abuse around the late ’70s only to come back in the mid-’80s and continue their careers. Rough spots aside, Aerosmith (while still technically active today) has without a doubt carved out their legacy and achieved lasting success as being one of the best selling American rock acts of all time.

Plus they were inducted into the Rock ‘n’ Roll Hall of Fame.